In quick response to the videos made by the LTDA, apparently showing that just over 50% of cyclists jumped red lights at two junctions over one hour in rush hour, I have three little points to make:

First, this evidence is statistically unsound. The samples are way too small to even begin to help us think about what these numbers mean in the wider picture of cyclist behaviour, that can’t possibly be represented by such a tiny sample, and obviously anyone could edit together a load of cyclists jumping red lights, the same could be done for taxi drivers.

Second, the focus on lawbreaking rather than danger is wrong. The LTDA say that they’re against the “unlawful cycling brigade”, whoever they may be. I suspect they don’t have meetings. It’s obviously a response to media outrage over the recent spate of deaths in London, and the generally excellent campaigning work of the LCC. The LTDA is opposing cyclists campaigns for spaces where they can be safe, likely because they see cycle facilities as damaging for their trade. A focus on danger rather than lawbreaking probably wouldn’t serve them so well, who kills more people, taxis or cyclists? I don’t know, but I’d take a safe bet that it’s taxis. Still, we can’t deny that at two junctions over short a period of time, quite a large proportion of cyclists went through reds, and that this is illegal.

Third, cyclists are a minority, and are blamed for the crazy environment that they have to work with. This is why it’s so important to focus on infrastructure, and the people who would become cyclists in the future when it’s seen as a safe, normal activity to partake in. Cyclists who jump reds sometimes argue that they are doing so for the preservation of their own safety, and that opens them up to the dual criticisms of “cycling is really dangerous, so you shouldn’t do it if you want to be safe” and “I see cyclists do insane/illegal things all the time, so it can’t be that”. I maintain that cycling is rational for me, the risks are fairly small and well worth what I get out of it in convenience and health. Most people don’t agree, they never try it because city cycling really does look like a truly terrifying thing to do.

Only when cycling is a mainstream pursuit will we be able to defend ourselves from “minority attacks” like these.

(A walk with Nico Hogg and others)

Following my visit the the Olympic Park, I was shocked. It was so empty and desolate, an oppressive landscape full of half-mile wide walkways, electric fences and lamp-post mounted CCTV cameras. A place where I could stand alone in the drizzle and be watched remotely. It was all so jarring that this weekend I decided to take a walk somewhere I’d feel less surveilled, where I’d hardly be watched at all. I decided to visit some border vacuums: 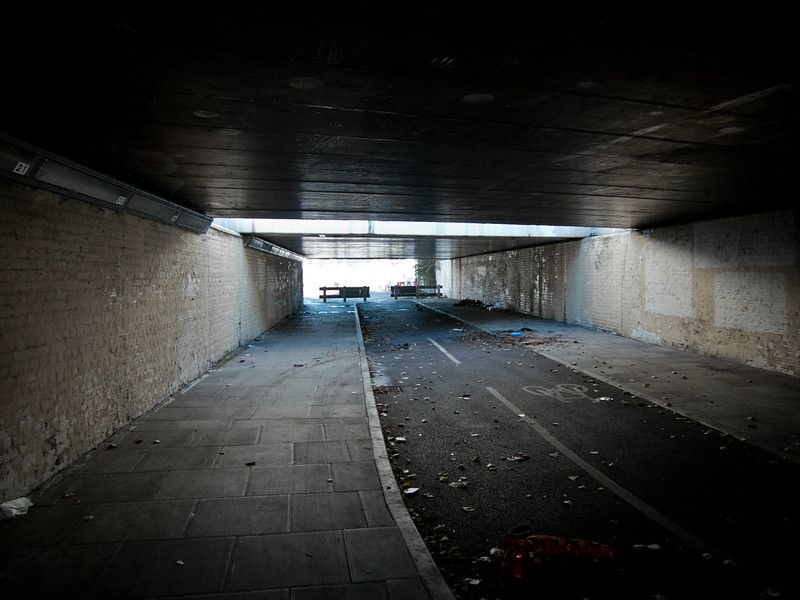 A border vacuum is somewhere in the shadow of an area in a city that people can’t, won’t or don’t cross. It’s an idea thought up by Jane Jacobs, she puts it well:

“Some borders eventually behave like gangrene, gradually deadening the streets and blocks around them: â€œThe root trouble with borders is that they are apt to form dead ends for most users of city streets. Consequently, the streets that [go to] a border are bound to be deadened places. They fail to get a by-the-way circulation of people going beyond them in the direction of the border because few are going to that Beyond. A kind of running-down process is set in motion.”

It’s a simple, powerful idea. When you start thinking with it you can see border vacuums everywhere. Next to railways, motorways, hospitals, university campuses, places that create real or imagined dead-ends casting shadows of dullness in their wake. The Olympic park is an attempt to fill such a vacuum, sitting in formerly semi-disused industrial wasteland along the border of the River Lea. The attempts to control it seemed heavy handed and unfinished, to have wiped out whatever little life was there before, leaving only crows and construction lorries. What Jacobs called the “great blight of dullness” hadn’t gone away with regeneration, if anything it had got worse.

Jacobs fought against both border vacuums and totalitarian schemes like the Olympic Park. She fought to stop Greenwich Village being flattened for a vast highway. It was a place that planners saw as a slum: a terrible, unhealthy and chaotic place. She argued that many so-called slums weren’t like that at all, that they happy, full of life, and complex. She arguedÂ  places that had been left alone by the powers that be were doing just fine and that what they needed was to be left alone. Borders weren’t like slums, though. They weren’t full enough of life, nor were there enough people to keep them interesting and safe. Border vacuums were likely to be dangerous wastelands which which were lucky if they attracted bums rather than muggers. But Jacobs was writing about a different time and place, from the stagnation of 1960’s New York City. What do London’s “Border Vacuums” look like in 2013? Lets go:

We start in Barking, there are plenty of borders here, two major highways, the rivers Thames and Roding and two railways cutting right through, we head towards the Roding, which is reinforced by the North Circular Road – a huge urban motorway. (map of the walk). The borderlands so far seem quiet, but unmenacing. A large gaggle of bored students standing smoking cigarettes in the carpark surrounding the inauspicious but modern housing of the “Millennium Academy” (I refrained from photographing them), a homeless shelter, and dead ends that reveal themselves to be tunnels under bridges. There’s a light sprinkling of families and dog-walkers.

We walk under the relief road, through a little housing estate that sits on the site of the old, slab-blocked Lintons, over the district line and through to another housing estate. This one reminds me of the outskirts of Whitstable, vast seas of green sit between tower blocks, bin alcoves and houses that look very homely in the quiet of a Saturday morning. Nico informs me that the bus drivers are only allowed to wait at the stand for 4 minutes to stop them from getting bricked, but for now it’s just quiet and empty.

We break out along a ribbed alley, each groyne harbouring a stash of rubbish. Out past the yellow self storage, and up a massive concrete bridge. The Roding valley, if it is one, is spectacular, surprising, a border vacuum filled with the very sparsest uses, gasometers, abandoned recreation grounds, horses, a mushroom farm: 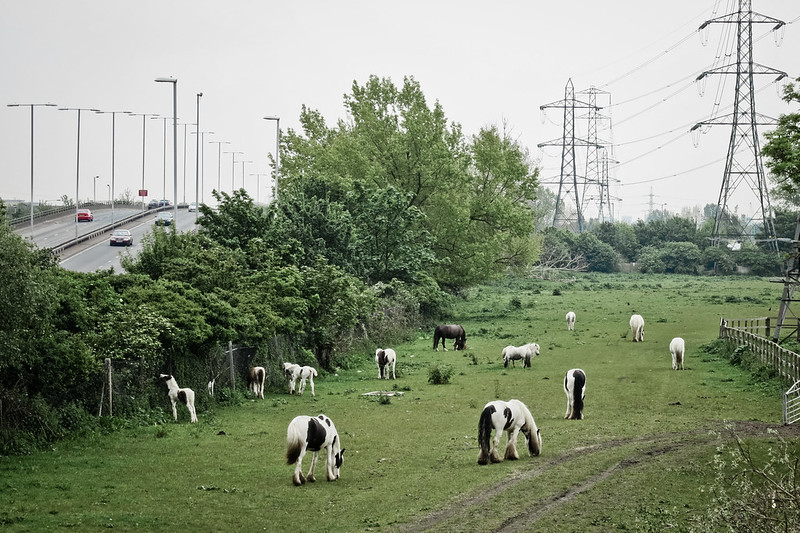 The recreation ground is odd. We squeeze through a well-maintained gap. The grass is at least waist high, growing through further high fences surrounding some sort of five a side pitch surrounded with Khanda symbols. Behind it lies a skate park, equally disused looking. It’s not the expensive concrete sculpted sort, most of the fixtures have just been bolted to the ground. Panels have been pulled off from the sides, revealing a metal superstructure, bedding and bottles of White Ace cider. People are living inside the skate ramps.

It gets me thinking. Jane Jacobs might see these borderlands as malevolent dead zones, I can see them more sympathetically. In a rapidly dividing, unequal city, and one where spaces are increasingly regulated and controlled, borders can be a haven. If nothing else is provided to you, the best you can hope for is not to be disturbed. In a city where land is worth such an incredible amount of money, maybe the future for the rest of us is in seeking out, and maybe even creating, borders to protect us.

We approached the thing from the North, from Hackney Marshes. I get the impression that this isn’t something you’re supposed to do. First off, you have to get across this fearsome looking road junction: http://goo.gl/maps/VfRnb – but this is just the beginning. To enter via the rear end of the olympic park is to be transplanted into a strange and alien landscape:

I admire the hardiness of the lone jogger coming towards me on the footpath, but it doesn’t scream a welcome for pedestrians. Still, maybe they can’t be held responsible if we decide to stroll in through the service entrance … maybe. After all, there’s the biggest new park to be made in London for 100 years or something around here. We pick our way through the concrete and tarmac. It’s a grey day, and we find a load of freshly laid turf amongst some earth movers, we must be here:

It’s freshly landscaped, and completely empty. If everyone had to approach it by the same route that I did, I’m not surprised, and it’s set behind what seems to be a solid wall of housing. Jon says that it looks posh, I say that it looks like a rebuilt version of Kowloon Walled City, an uneven collection of buildings that seem to form a wall from a distance, passages only opening to the eye when you come closer to it. It dominates the park:

It’s a strange feeling, the whole thing is clearly unfinished. There’s coloured hoarding and statements about the history of the area:Â  the infamous fridge mountain and striking match girls. The flats are empty, disconnected from Stratford proper by rivers and Westfield, and disconnected to the north by massive roads and Hackney Marshes, this is a park without a community, the obviously new turf seems symbolic. It hasn’t bedded in yet. It’s a strange thing, a place built all at once, not quite finished, balconies still covered top to bottom in netting almost as if the shrink wrap hasn’t been taken off yet. There is a fully exciting looking adventure playground, and it’s already starting to get used. It’s got some really weird and unusual stuff, including a set of hand-pumps that send water through a load of artificial channels and eventually into a drain. I imagine there’s some fun, philosophical explanation for all this, but the kids don’t seem to mind. I also notice that a good portion of the lampposts have little CCTV cameras on them, and that there are burly, bored looking security guards wandering around.

Then we come across something that seems very strange for a park:

And I thought we were done with seas of tarmac! Note the electric fence to the left of the frame. I didn’t seem to be surrounding anything interesting, I guess it’s a not yet cleared up Olympic legacy. We’re still in event-space, this is a path that was clearly built to deal with a lot of people. In between? You can see that it looks pretty empty.

It’s hard to know what this place will really turn into, filled with empty flats and show flats, it’s an exercise in imagination. The thing is, I just can’t imagine living here, or what sort of community would form. A landscape dominated by a gigantic shopping centre, gigantic apartment blocks, gigantic walkways that dilute any human contact that I might have on it.

It feels functional, a stack of boxes sitting on a load of transport. The marketing suite, a sort of bizarre museum of the future, tries to fill in some of the gaps for us, selling a lifestyle that no-one is yet living, selling the possible to a researched client base. All of the objects in the various dioramas were well stuck down, nature, transport, homeliness, all can be yours for Â£375 a week for a two bedroom flat.

We left after accidentally starting a row between an agent from the part-rent-part-buy company and the all-rent company. The aggressor paused mid-berate to wish us well as we fled. Through Westfield, over the railway, past the monotone African Preacher, through the Stratford Centre. Passing by people living the lives they had now. What a relief.